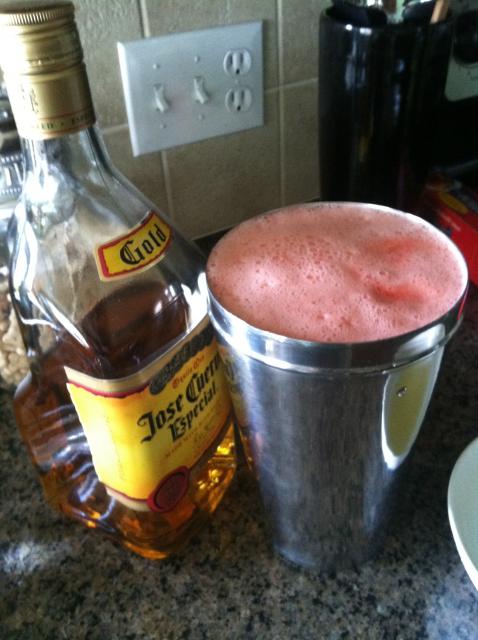 Nothing says summer like watermelon…In fact, it’s probably my favorite thing about summer. The only thing better than a nice slice of ripe juicy watermelon is a tall glass of watermelon margarita on the rocks. Delicious. This recipe takes a bit of preparation, but is pretty easy to make once you have the watermelon puree. Before you start get a nice ripe seedless watermelon and cut it up into small chunks.  This watermelon margarita recipe was inspired by Food Bar in New York City (Chelsea)

In a large shaker, combine the following ingredients, shake and pour into glass without straining. You CAN salt the rims on this drink, but I think salted rims are better left to traditional margaritas.

NOTE: When choosing a watermelon, you want to look for one that does not have bumps or bruises. The melon should be medium to light green, but not yellowing. The bottom should be yellow/white. Now, thump it! You want to tap the watermelon a few times and listen to the sound it makes and how it feels. It should sound like your hand is bouncing off the watermelon. Kind of hollow or drum-like. Now buy it take it home and WASH IT! Yes, I know you won't be eating the outside, but wash it. you're going to have it sitting on your cutting board and you don't want the dirt and pesticides getting all over the delicious fruit inside. OK- cut the watermelon into chunks, and stick them in a blender. Puree them until there aren't any chunks left and it's just watermelon juice.